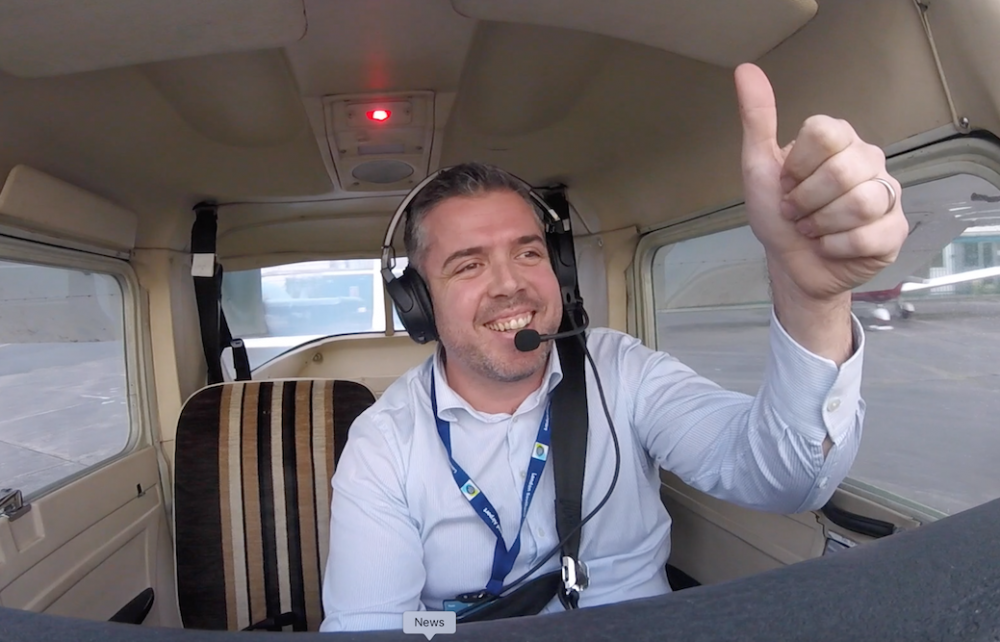 Congratulations to Ryan Edkins on achieving his first solo flight on 7th February 2020, in G-HUXY.

Ryan has been learning to fly with us here at Seawing flying club since September 2019 and has been making steady progress towards getting his private pilot license. Under the watchful eye of Harry Page, our chief flying Instructor, Ryan was able to complete his 1st Solo circuit at Southend Airport, acheiving a great milestone.

Ryan said, “Seeing Harry get out of the aircraft, it suddenly dawned on me what I was about to do! I felt confident in my ability fly the aircraft safely, but there’s something about flying solo that really gets your heart racing.”

Ryan continues, “When I called ATC to confirm I was ready to Taxi, they asked me taxi to the climb out end of the runway (holding point C1), which was unusual, so I asked for confirmation and ATC confirmed that I had to backtrack, lineup and wait before getting clearance for takeoof. Apparently a Ryanair flight had to disembark some passengers as was blocking the route to holding point A1.

I had been flying the circuit a number of times before my solo flight, so as soon as the aircraft left the ground, I felt confident with the task ahead. Climbing to 500ft, then turning right crosswind to 1000ft I felt happy with how it was going. It was only after turning the base leg that nerves started to kick in, realising that now I had to land this aircraft safely.

I started to get the aircraft ready to land, dropping 2 stages of flaps, and running through the landing checks. Turning final I made my call to ATC for clearance to land, and dropped my last stage of flaps.

Coming into land I was happy with flaring and keeping on the centre line, as soon as the second sink started I ruddered it straight but I pulled the nose a little too high at the last moment causing the stall warning noise to come on! The aircraft was safley down, but I definately have

I was so overwhelmed with joy and releif of making a safe landing completely solo, that I forgot to raise the flaps before taxying off the runway. Student error!

Lesson learnt – Dont forget to raise the flaps after landing!

I’d like to thank Harry for all his support so far, and I look forward to getting my license before the summer.”

If you are interested in getting your private pilots license, and would like to find out more information about learning to fly at Southend Airport, contact the club via the trial lesson page, or give us a call.

Where to Find Us?